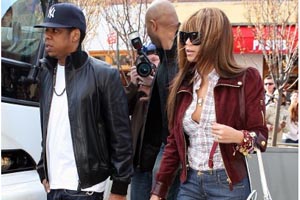 Word on the street is Jay Z and wife Beyonce are in town ahead of U2's NZ shows this week.

Extra word on the street is that many individuals are only really interested in seeing Jay Z support U2, not U2 themselves.

U2 undoubtedly is one of the world's most successful bands, with a huge fan base. But those who immediately claim a love for U2, are faced with others who just as swiftly say, U2 ain't my cuppa tea.

For me, I can quite happily listen to someone say they don't like a band I like... it's their opinion. But the U2, Jay Z topic can easily erupt into an epic argument...

So now is your time to claim your favourite and get the over all consensus out there, vote on our daily poll. U2 or Jay Z, who would you rather see in concert?